Levels of detail determine the basic resolution of a model. Reality is represented in a model with a certain level of detail, e.g. systems, processes, data, business models. Thereby, the selection of the degree of detail is arbitrary - e.g. world, continent, country, region, city, residential area, road, house etc. For models, the levels of detail provide generally applicable layer definitions.

Before a model is created, the requirements for the model should be specified concerning scope, resolution degree, in order to fill the model with appropriate information.

The levels of detail consist of three plus one levels: Macro, Meso, Micro, and Meta. 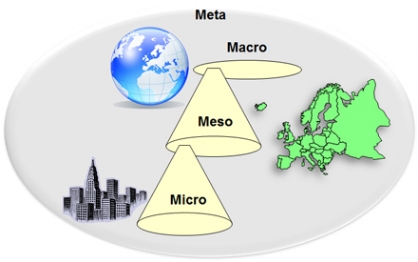 The macro level is the coarsest view of the model. It offers a general overview of the area under consideration. This level defines and covers the entire scope. At the same time, this level forms the essential structure for further refinements. Examples are the society as a whole, the globe with the continents, the value chain of an enterprise with its essential functions and sequences. Importantly, the range that was specified initially has to be completely described on this highest level.

The meso level details gradually the highest level into several layers, e.g. the continents into countries, into regions, into cities, into residential areas, into roads etc. On one layer, elements should be described with a similar level of detail. The meso area consists of at least one level that connects the macro with the micro level. In specific cases, it can be necessary to build up several layers. Be aware that the number of elements on each level multiplies. If each layer consists of five elements, you get on the first level five elements, on the second level 5x5=25 elements, on the third level 5x5x5:125 elements etc. The requirements of the model determine the depth of description. However, it is favorable to resist the impulse to create many levels, since the administration increases exponentially.

The micro level describes the lowest level of the model and offers the most detailed view of the model. With this layer it is determined, how fine-tuned the model is. There are no additional details - in our example, the lowest level is the house. Thereby all houses are documented that can be found in a road, but no information about the number of apartments, the inhabitants or similar details. On the micro level the limit of the detailing is reached that has to be determined upfront. Finer analyses are not possible than those on the micro level.

The meta level is the abstract look at the model. Here are all elements that describe the model structure, e.g. micro, meso, macro level, attributes, and relations between the attributes as well as the interpretation logic. The meta level is not a part of the model, thus preventing self-referentiality and other model problems. Nevertheless, the meta level belongs to each model. Examples of meta levels are e.g. standardized model structures, like the Zachman Framework, the ARIS model, the Governance Framework.

The main goal of a model is the simplified illustration of the reality in such a way that manageable analyses facilitate an effective use and control. For this reason, models should only be detailed as far as the current question requires. With each further detailing in the meso level, you will increase the documentation and update efforts. At the same time, the complexity of the model increases and the significance of the outcomes decreases. From chaos and complexity science, we know that with each refinement the predictableness of the system performance has to be recalibrated.
For this reason: Less is faster - more economically - more.