The cycle of communication is the transmission process of contents from sender to receiver. Some people assume that this is a spontaneous, unidirectional flow. Actually, it is a mutual exchange. Fruitful communication begins already much earlier and does not end with the execution, but only after the goal to inform is achieved. The cycle turns repeatedly until the desired result is available. 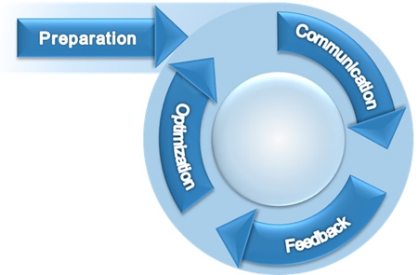 In the preparation, contents are arranged with as few generalizations, distortions or deletions as possible. Contradictions and undesired interpretations are that way limited to a minimum. The occupation of the sender with its message in the form of prepared texts or graphical sketches strengthens its own understanding. At the same time, the message is adapted to the perspectives of the specific target group. This creates room for spontaneous expressions, without risking the actual message.

The actual transmission is executed by utilizing talks, discussions and publications on paper or virtually in the Internet. Dependent on media and audience, the statements and editing can vary. In any case, the KISS principle (Keep it short & simple) and the 7plusminus2-Regel (i.e. to limit oneself to five to nine aspects) improve the desired effect of the message.

Almost every message produces prompt feedback. The receivers state their opinions by means of facial expressions and gesturing, applause or sigh and additionally with their messages. Feedback is the chance to recognize at an early stage the effect and flaws of their own communication. Response only becomes negative, if it is missing or ignored. For this reason, you should always request feedback.

Shortcomings become visible based on the responses. These can be odd formulations, the lacking attention of the target group or wrong assumptions. These are mistakes that should be fixed during the preparation. In this step, the weaknesses will be corrected, until the goals are reached.