Meaning appears as meme in form of an idea, topic, concept model, plan or practical adoption in a meaning carrier that processes and transfers the content to another meaning carrier. Meme is the core of a message, the real meaning, or like M. Csikszentmihalyi expresses it „any permanent pattern of matter or information produced by an act of human intentionality“, i.e. anything that is  causally created and thought by humans. The science of meme is memetics that deals with meme mechanisms, e.g. fidelity, fertility, longevity. Most outstanding is the contagiousness of meme that leads to an acute transmission.

Without meaning carrier meme cannot be localized currently. The two meaning carrier are things and people. Things contain meaning in form, function and their image. Humans think and communicate meaning in words, pictures and emotions. Meme processing takes place in perception, thinking, communication and acting. Although the meaning carrier transfers the message, meaning is eventually created in the head of the observer as a personal interpretation, e.g. ‚there is no bank’ can mean: bench, riverside, financial institute etc.; ‚he has no reason’ can mean: cause, explanation, right etc.; ‚the wing is large’ can mean: birds arm, part of a building, stage, unit of airplanes, one’s protection etc. The conscious consideration of the meaning carrier facilitates the reduction of ambiguity and a simplified transfer of meme (especially through memefication).

Meaning carriers are: humans and things. 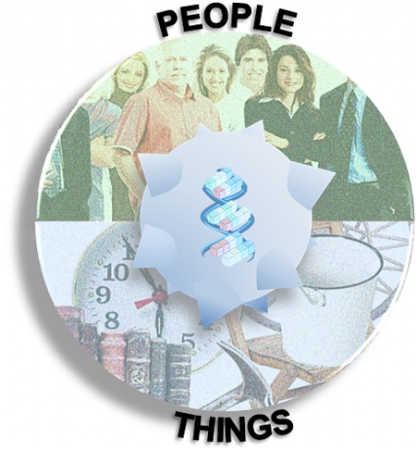 Crucial meaning carriers are humans because they are able to produce, process, store and above all interpret meaning. Attention determines while perceiving what is consciously or unconsciously noticed, everything else gets quasi ‚ignored’. During thinking, facts are linked with existing mental models and meaning develops. Personal, verbal or nonverbal expression are found and passed on throughout communication. This can also be done by using a thing, e.g. a document, picture, sculpture. Another meaning-carrying aspect of humans is the act (doing and behavior) that makes meaning implicitly visible.

are artefacts that people created. Design components are the form, the original function as well as the related image. Form is expression of zeitgeist or fashion and provides thereby related values and associations. Function is the underlying purpose of the thing. In the course of time it can change, e.g. the fountain pen, which was originally developed for writing, was replaced by other „typewriters" and serves nowadays as a status symbol for the signer. Image became important in the age of mass production, since it assigns meaning to inexpensive mass products, which valorizes them. Examples are consumer goods that suggest with their use a special attitude, e.g. mobile phones that emphasize an exceptional type.

Meaning carriers are important as a vehicle, but also as a recipient of meaning. For this reason everybody should always be aware of the respective, meaning-carrying role of people and things.